Redis is an in memory key value store developed to be scale-able from ground up. Redis enables this through client side sharding as well as server side master/slave replication. In this post I am going to explain a Simple 1 Master 2 Slave Server Replication Setup for Redis in a Single Host. This can be easily moved to multiple Hosts if and when the need arises with very minor changes. For this you must have downloaded redis and compiled it. If you haven't done that please follow my previous post. 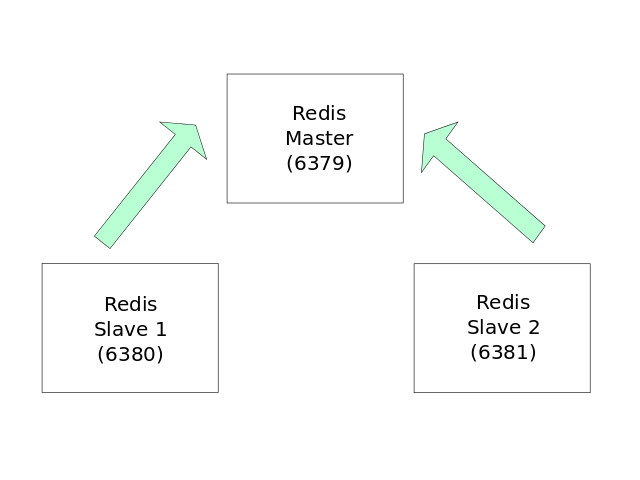 The setup I am going to create looks like the above figure, where there is a Redis master listening on port 6379 and 2 Redis slaves connecting to the Master and will be listening on ports 6380 and 6381 respectively.

You need to follow the below steps to create 2 different configuration files for the slaves.

5.  Open the "redis-slave1.conf" file using a Text Editor and find the line which has the port configuration and change it so that it looks like the following;

6.  And then find the line which has the slaveof configuration and change it so that it looks like the following;

7.   And then find dbfilename configuration and change to "slave1-dump.rdb" as following;

8.  Repeat the steps 5 - 7 with "redis-slave2.conf" but this time the port must be 6381, dbfilename becomes "slave2-dump.rdb" and slaveof configuration remains the same.

9.  Now you can start the Master followed by the 2 Slave by issuing the following commands;

The recommended setup is that All writes are done to Master and All reads are performed on Slaves.
As you can see you just need to change the "127.0.0.1" host ip in your Slaves' slaveof command if you want to move this replication setup to multiple hosts.